Learn how you can support student success with a gift to the VFCCE.

It Takes One to Know 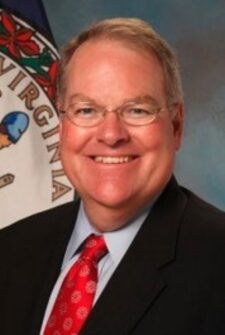 William Hazel, Jr., M.D., knows that most apples don’t fall far from the proverbial family tree. But if Virginia’s workforce is to grow and flourish, more of its “apples” will need to find and pursue new career opportunities, which may or may not be in the orchards in which they were planted. At the same time, “You can’t pursue something you don’t know about, or don’t see as a real option for economic and career advancement,” Hazel suggests. And for this reason, he believes the discovery process should start in grade school.

As senior deputy director for the Claude Moore Charitable Foundation and former two-term Secretary of Health and Human Resources, Hazel believes in a “highway” concept for workforce development—one that involves a journey from early career discovery to constant reinvention of skillsets. He also sees community colleges as integral to this process, leading him to one of his latest roles as an incoming board member for the Virginia Foundation of Community College Education (VFCCE). Through private and philanthropic support, Hazel believes the road to economic success and self-improvement can remain open and smooth for Virginians.

Historically, most people are born into their primary career options, Hazel says. In his case, that was construction.

That method for career selection not only shorts individuals of their highest and best uses, but it also denies Virginia’s workforce of the diverse skillsets needed to fuel the economy, Hazel suggests.

“We’re not always set up and suited to doing what our parents did, even if that is what we know,” he says.

In his case, it was a knee injury that sent him in a different direction. As his undergraduate studies came to an end and he was set to attend business school, Hazel returned for a six-week checkup with his doctor, who asked, “Have you ever thought about going into medicine? You really ought to think about it.”

And so, he did. After graduating on a Tuesday, he began his first course in biology the following Monday, foregoing business school. “As they say, the rest is history,” he declares. Ultimately, it was a move that would lead to—among many other achievements—a long-lasting career as an orthopedic surgeon, a position as the assistant surgeon for the Washington Redskins (now Commanders) and two terms as Secretary of Health and Human Resources for the Commonwealth.

But he wants others to have similar discoveries much sooner than their last years of college.

The Claude Moore Charitable Foundation aims to reach students as young as grade school, he says, exposing them to fields ranging from agriculture to health sciences.

But the same applies to those who already have careers, because “It’s unrealistic to expect someone is going to do the same job all of their life,” Hazel says. “So, then the question is how do you reskill and upskill to stay current with labor needs and new career goals?”

That’s where he sees community college coming in.

As an incoming board member for VFCCE, Hazel feels it’s imperative that Virginia’s community colleges receive private support from foundations such as VFCCE to fill the gaps between the immediate needs of industry and a state system that tends to lag through reactive programs.

“In addition to finding new career options, the country won’t survive unless people have the ability to do the things that need to be done right now,” he says. “Employers in a region know what they need and if they aren’t engaged by educators, then what will the academic and training communities do? They’ll teach what they know, which doesn’t necessarily reflect current technologies and needs. For education and training to be worthwhile, there has to be an engagement between colleges and industries. This is where I think community colleges play a key role with skills development, certificates, and two-year degrees.

While state funding tends to be constrained and often serves as a trailing indicator of need, private funding from foundations and other sources allows community colleges to be “flexible and local, as well as fast and reactive,” Hazel says. But those opportunities only exist through philanthropic support and involvement of companies and industries. Ultimately, it’s their involvement that leads to more success stories.

“When you hear someone say, ‘I didn’t even know this was a possibility and yet here I am. I did it.’” Those are the stories that tell us the highway to workforce development is heading in the right direction.

« Building on a Legacy of Success
We use cookies to ensure that we give you the best experience on our website. If you continue to use this site we will assume that you are happy with it.AcceptPrivacy Policy