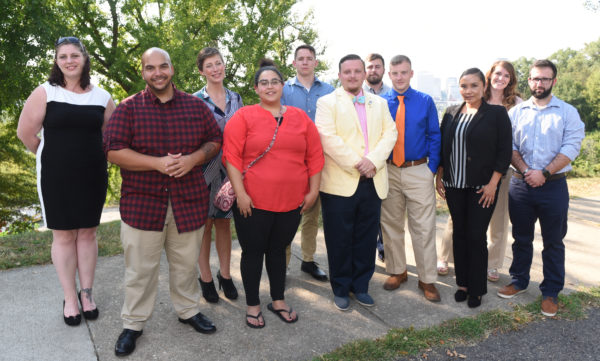 In 2019, thanks to the support of Dominion Energy, Valley Proteins, INOVA, the Potomac Health Foundation, and the Ben and Betty Davenport Investment in Early Childhood Education, the VFCCE awarded its prestigious fellowship opportunities to 43 students across Virginia, providing support totaling nearly $200,000 for the second year of instruction at Virginia’s Community Colleges.

Corinna Carr, John Tyler Community College – Corrina is a military spouse who is pursuing a degree in Business. Her long-term career goal is to serve in hospital administration, and she plans to transfer to Old Dominion University upon completing her term at JTCC. She currently serves her community by volunteering at a local food bank, and she is seeking additional volunteer opportunities in area hospitals.

Bryan Huffman, Blue Ridge Community College – Bryan is a veteran of the U.S. Armed Forces who majors in Computer Science. “The first scientist I met through the Army convinced me of the importance of discovery and invention,” he says. “I hope to secure a research position in a federal agency or top-tier university.” Bryan plans to transfer to the University of Virginia to pursue advanced degrees in Mathematics upon completion of his courses at BRCC.

Katrina Duff, Germanna Community College – Katrina is a mother of four and the spouse of a disabled veteran. In order to help support her family, she is pursuing a degree in Nursing to allow her to change careers and boost her earning potential. Katrina volunteers with the Boy Scouts of America, Girl Scouts of the USA, and Veterans of Foreign Wars in her area. She intends to transfer to Old Dominion University to earn a Bachelor of Science in Nursing.

David Halliburton, Lord Fairfax Community College – David is a disabled veteran of the U.S. Armed Forces who is currently pursuing a degree in Nursing. During his military service, he participated in Habitat for Humanity projects and learned the values of leadership and goal setting. David attributes his drive to mentorship he received from his NCO while in the Army. He is planning a career as a trauma surgeon and intends to transfer to George Mason University to continue his education.

Alyssa Howard, Lord Fairfax Community College – Alyssa is a Nursing student who plans to build a career that will truly make a lasting impact on the lives of her patients. “My professional goal is to become a Nurse Midwife,” she says. “Through Midwifery, I hope to become an advocate for marginalized groups suffering from the current maternal and infant care system.” As a first-generation college student and single mother, Alyssa still finds 200 hours per year to volunteer with The Robertson Association and its affiliates. She plans to transfer to James Madison University to pursue advanced degrees in Nursing.

Michael Williams, Lord Fairfax Community College – Michael is a veteran of the U.S. Armed Forces who recently completed his EMT certification and now majors in Nursing. A volunteer with the Culpeper County Volunteer Rescue Squad and employee of Inova Fairfax Medical Campus, he has a clear career goal to serve as a flight nurse/paramedic. Michael intends to transfer to George Mason University upon completion of his program at LFCC.

Stacy Becenti, Northern Virginia Community College – Stacy is a veteran of the U.S. Armed Forces who majors in Business Administration. As a first-generation college student, she plans to set a positive example for others by continuing her volunteer service to the City of Alexandria and various student organizations within college while maintaining her high GPA. Stacy plans to transfer to George Mason University to earn advanced degrees in Business and Law to help her achieve her career goal of serving as an advisor within the Navajo Nation government.

Mark Dorsey, Northern Virginia Community College – Mark is a veteran of the U.S. Armed Forces and an information technology specialist for the FBI. He is currently pursuing a degree in English and hopes to make a career change and become an English teacher. Mark says, “I strongly believe everyone should help however and whenever they are able. We might not be able to save the world, but if we can make someone’s day a little brighter, we’re making progress.” He plans to transfer to George Mason University to earn advanced degrees in English.

Jenilyn Hatch, Northern Virginia Community College – Jenilyn is a military spouse and mother of six who majors in Nursing. She has dedicated herself to the service of her family and community, and in 2015 was awarded the Army Aviation Lady of Loreto honor for her support and volunteer efforts for the Army Aviation family and the Republic of Korea. Jenilyn has the career goal of becoming a Neonatal Intensive Care Nurse, and she plans to transfer to the University of Virginia to complete her training and education.

Ryan Miller, Northern Virginia Community College – Ryan is a veteran of the U.S. Armed Forces with a career goal in electrical engineering. As an adult student, his interest in the pursuit of a degree in Science has been influenced by his past work in the energy and technology industries, including an appointment to lead an International Commissioning Team to successfully completing the first Next Generation Power Plant project in North America. Ryan plans to earn his advanced degree at the University of Virginia.

Riley Hawley, Virginia Western Community College – Riley is a veteran of the U.S. Armed Forces who majors in Science. He says, “I believe that strong leaders are formed with a mutual respect. After all, leaders rely on a motivated and focused team.” Riley displays his leadership in the community by volunteering with Habitat for Humanity, and he plans to work with the Military Student Center at his college to help other veterans and their families succeed. He aims to work as a design engineer in the mechanical field after completing his bachelor’s degree at Old Dominion University.

Caleb Stinchcomb, Virginia Western Community College – Caleb is a veteran of the U.S. Armed Forces pursuing a degree in Engineering. He has served as a Student Representative for Virginia Western to the State Council of Higher Education, and he has volunteered in his community as part of the Civil Air Patrol. “To make the most change and find the best solution, you need to surround yourself with a very diverse and motivated crowd,” he says. Caleb plans to transfer to Old Dominion University to earn his advanced degree in Engineering. His goal is to eventually return to Virginia Western as an instructor.